Okay. I’m delighted you are visiting BeesBlogs to read my latest review of Lindsey Bull & Plastique Fantastique going Head to Head . But, before we go any further, Go See this latest offering from Castlefield Gallery. It’s a pity that the performance by Plastique Fantastique can’t be repeated as it had everyone watching totally mesmerised!

The opening night preview event at Castlefield Gallery was a ‘Fantastique’ event  with a  new body of work by Manchester-based artist Lindsey Bull, alongside a new mixed media installation and performance by London-based collective Plastique Fantastique.

I had recently seen a painting by Lindsey Bull at an exhibition at Manchester’s PS Mirabel Studios. Titled ‘Smoke 2016’ the painting captured a the head and shoulders of a figure almost obscured by smoke, and consequently I was looking forward to this new body of work produced for the exhibition the ‘Undergrowth Series’    as Bull told the audience, her inspiration came from a Vogue Italy photo-shoot taken in a woodland setting. Whatever the inspiration, this is a powerful series of figurative paintings with bold strokes and delicate touches, primed canvas, left untouched, adding light and mysticism to the figures, the backdrop of ‘undergrowth’ framing the figures and asking the question of the viewer why are they there? The twins and doubles in Bull’s painting are similar in appearance, but also seem to share a potent mental connection. To quote Castlefield Gallery ‘ Bull exploits the serendipity of the painterly performance, creating and capturing different moments of these characters in action’

Plastique Fantastique – is made up of a core group of collaborators including, for this exhibition, David Burrows, Alex Marzeta, Simon O’Sullivan and Vanessa Page.For the Castlefield Gallery exhibition the group have studied various ‘Meme Cultures’ some of which are capable of spreading ideas and behaviours by replicating and repeating themselves. They have detected generations and strands of memes including a strand they call Traitor Memes. They have identified the original traitor meme as the image of the Hanging Man, which dates back to renaissance Italy and usually seen on Tarot cards. Depending how the card falls the Hanging Man can be taken as two forms. A right way and a wrong way round, a helpless sacrifice hung upside down by the ankle or as a figure defying gravity who makes everything else seem the wrong way up. Plastique Fantastique call this latter state the Trickster-Traitor Meme.

For the opening of the exhibition   a performance entitled ‘Plastique Fantastique welcome Traitor Meme’ reinterpreted the Mötorhead song ‘Traitor’ (1987) into an electronic-drone-folk song, invoking a traitor meme in order to ask it questions.

As a performance piece this was brilliant. so much so that passers were drawn, to the sounds of Traitor, Traitor, chanted by Vanessa Page, and a traitor meme with face covered in glitter, to the windows above the lower gallery space! Art in action and played out to an extended crowd, this was totally off the wall and extremely enjoyable.

Although the performance is no longer available a number of works on the theme of the Hanging Man are on display. Some of which have fabric bags on which have ‘Uber’ or ‘Reddit’ on them which appear to be the counterbalance weight holding up the hanging man by the ankle. when asked what this represented Plastique Fantastique said ‘feel free to put your own interpretation on it’

Any #art bloggers in #Scunthorpe area to give a #shoutout to a fantastic artist @JFrostFineArt His touring #exhibition 'The Way of All Flesh' is on @2021VisualArts in #Scunthorpe Please dm me for more details. Appreciated🐝📸#BlackHillCreative #sculpture #wood #lincolnshire https://t.co/jHhcHZtBJP 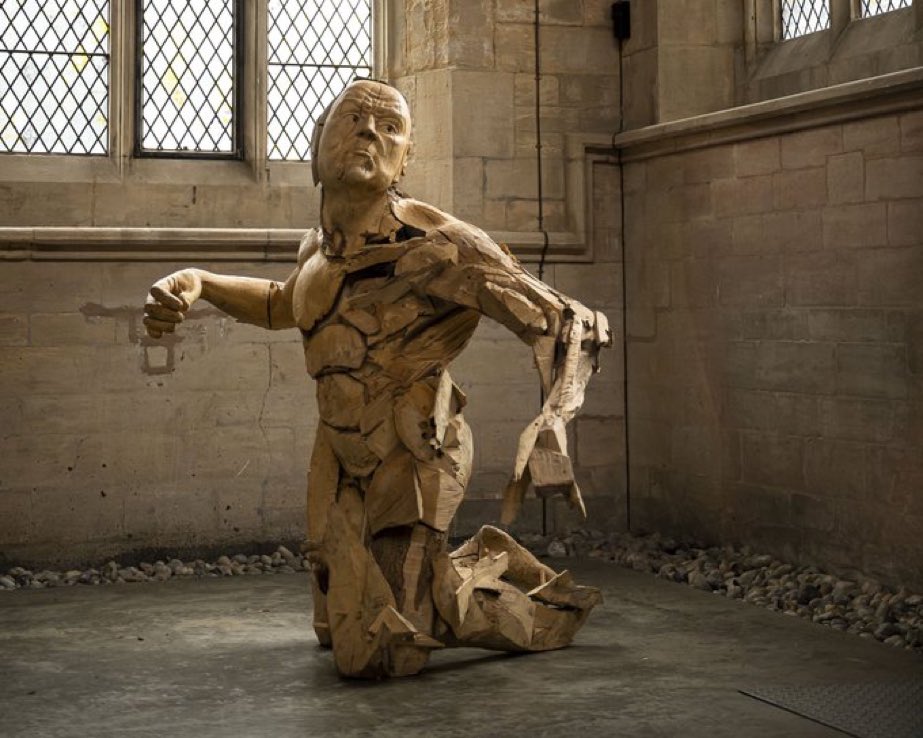 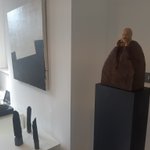 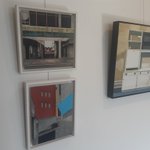 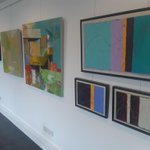 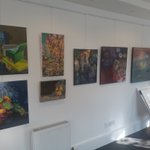